THE FIRST VEGAN DOG IN ALL OF LITERATURE
Amazon

Download File
A DOG NAMED RANDALL was my first long story. And like my last book,  KYRIE'S Tale the story is embellished from actual happenings.  The particulars were told to me by one of the two animal lovers who rescued Randall and adopted him out. I changed the two adults to the boy Ned and made Randall vegan. Marc Wilk, who co-authored  Randall, was able to give  special life from the kid's perspective. And of course, Marc Chalvin's illustrations will open the window to your heart. It's become a wonderful fun fable and once we can pay back expenses all the profits will go to Brilliant Animal Hospital in NYC. I hope you have fun reading Randall.
As ever,
With hope and love for better days,
Marian
February 2021
New York City 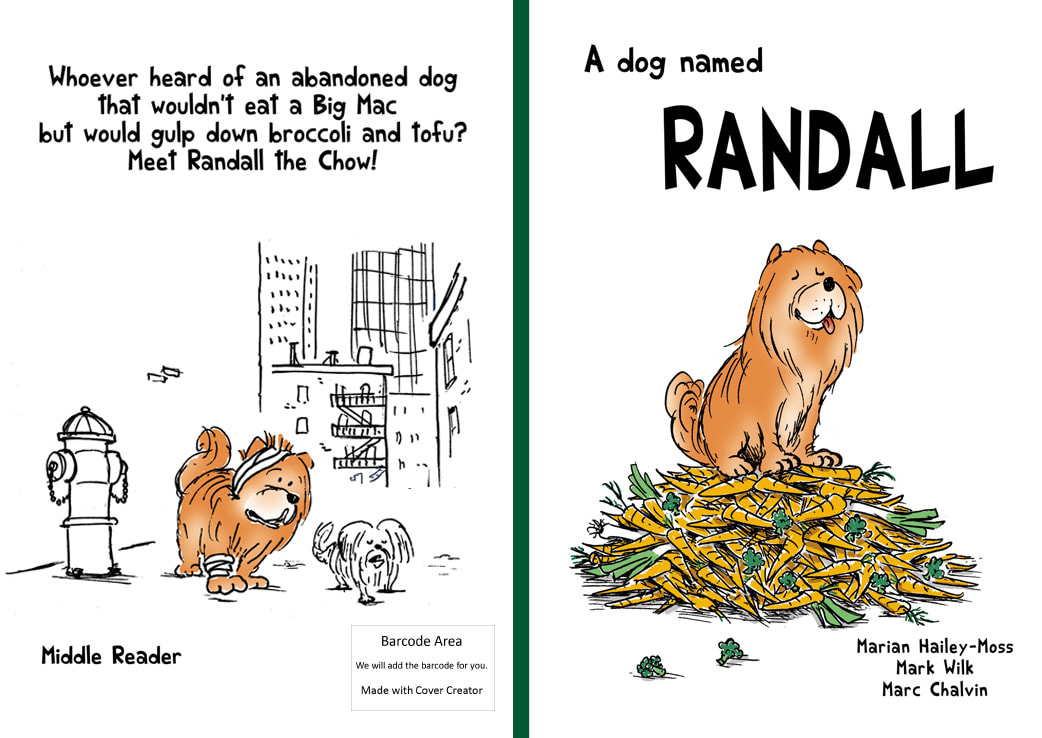 THE FOLLOWING IS ONE EXPLANATION OF HOW RANDALL GOT TO RANDALL'S ISLAND - THIS IS AN ASIDE AND NOT IN THE BOOK: ​


After forever, the box opened. The pup looked into the big brown eyes of a beautiful woman. She picked him up and carried him to some newspaper. “Do your stuff!” He was fed something warm and mushy. Then she put him in the arms of an old woman. The circles on her arms clinked and clanked and sparkled.  The pup felt loved right away.
Mamala and the pup clung to one another - wheeling, clanking, sparkling, watching TV and listening to Moroccan music. Mamala held on tight even though the pup got bigger and heavier.
Then one spring morning, as the sun was peeking through the windows, Mamla put the pup gently down on the floor. “I’m going home Ra.” She stood up and walked through those windows, stepped on a cloud and was gone.
Ra stayed by her wheel chair night and day waiting for her to come back. Soon after Mamala went, the beautiful woman went too. Ra was left with only the wheel chair and his friend Juan.
Juan cooked for the family and had taken Ra for walks. They had gone up and down Fifth Avenue four times each day. When Ra would do his stuff Juan would ooooh and ahhh and give him a treat.
Juan loved Ra and the doggie was to be his now. The wheelchair would go with them. It all felt hopeful until…. Cha Cha
Cha Cha was pretty in a hard way. She had long red nails. And wore high metal spike heels. Something wasn’t right.  Ra wanted to protect Juan because he was like a puppy around her.
The day came when Juan said “Come on Ra, we’re going home.” He was pushing the wheel chair to the front door when Cha Cha made a surprise visit.  She pulled Juan into the kitchen.  Ra could hear them talking. He lay down by Mamala’s wheelchair. When the shouting began, Ra trotted to the doorway.
“No, no, no, no!” Juan yelled
“Yes, yes, yes, yes!” Cha Cha yelled even louder. “Take him to my place now. My brother is waiting.  It’ll be over in a half an hour.  Nothing will go to waste.”
“He’s my friend.” Juan said. “I love Ra.”
“I love him too.” Cha Cha said. “His fur is gorgeous!”
What were they talking about? But Ra’s body sensed it was dreadful. There was a knot in his stomach and it felt like he was in another world.
Still looking at Juan, Cha Cha glided to the door.  Not seeing Ra there, she tripped on his right front paw with one of her spike heels.
“You Bad Dog,” Cha Cha screamed. She lifted her foot and stomped hard on the same paw. But she missed because Ra sat up quick.
“STOP!”Juan yelled.“STOP RIGHT NOW!”
For an instant, the Chinese guard dog surged through Ra’s body. He could have taken a big bite but he held still. She was Juan’s friend.
Juan hooked Ra’s leash and took him to the car. Cha Cha got in the front seat.
Everything would be okay. They were going home.
The traffic was crowded and moving slow.   The crate had a wire door on the front and Juan had left the trunk of the car open.  Ra watched the moving grey cement of the road. He felt empty-like. His right paw was throbbing and it hurt bad. He tried to lick it better. Up Fifth Avenue, turning onto the Robert F. Kennedy Bridge….he kept hearing in his mind over and over: “nothing will go to waste” What does that mean?
Mamala!…..Mamala!  Where did you go…?
The car stopped. A door slammed. “I’ll get the E-Z pass from the trunk.” Juan raised the trunk door. He bent inside towards Ra and quietly opened the crate door. “Run Ra.” Juan whispered. “Run for your life.”